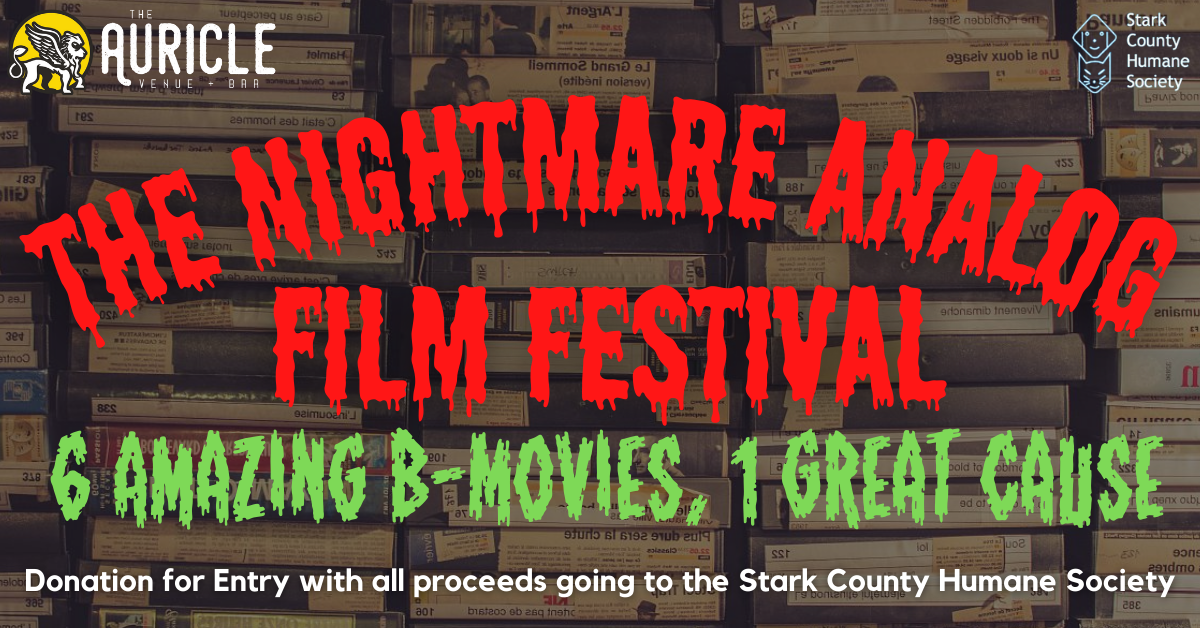 Come and be a part of, The Nightmare Analog Film Festival!

This non-profit, FREE, event is the first ever Shot-On-Video film festival! Donations at the door go to The Stark County Humane Society!

Six shot-on-video horror films. A festival of macabre D-I-Y cinema, from some of the sickest minds to ever touch a video camera including Henrique Couto, Chris Seaver, The Campbell Brothers, Todd Sheets and more!

Cannibal Campout (1988): Foolhardy campers wind up on the menu at a backwoods cannibal feast. [Dir. By Jon McBride]

Midnight Skater (2002): Six students track a mysterious skateboarder and realize they are getting a crash course in Murder 101. [Dir. By The Campbell Brothers] FILMED IN KENT, OHIO!!!

Death O'Lantern (2011): The kids of Sleepy Hollow Heights are being stalked by the spirit of a killer named Stingy Jack. Now it's up to the the Horror Club, to stop the evil pumpkin-headed killer before he devours the five souls he needs to be born again. [Dir. By Chris Seaver]

Babysitter Massacre (2013): Young women form a baby-sitting business until one of their friends dies. Years later, they go their separate ways, but someone starts killing them one at a time. [Dir By. Henrique Couto] FILMED IN DAYTON, OH!!!

Come and join us for this night of terrifying analog video! We promise, you'll never hit play on your VCR again!

Entry is FREE, but we are asking for Donations for Stark County Humane Society
18+ Only
Doors @ 4PM
Films Start @ 5PM

Donations at the door for Stark County Humane Society!
http://www.starkhumane.org

Any cookies that may not be particularly necessary for the website to function and is used specifically to collect user personal data via analytics, ads, other embedded contents are termed as non-necessary cookies. It is mandatory to procure user consent prior to running these cookies on your website.